Optical illusions are fun to create in photography. Colour, light and patterns can be used to create images that can be deceptive or misleading to our brains. The information that is gathered by our eyes is processed by the brain, but often what we perceive is not necessarily the true image. Images that differ from the objective reality can leave us perplexed and confused as we see that the separate details of the image don’t even make sense. The camera can be used to fool the eye so that first we see one thing, but then it can be deconstructed into something else.

With this theme we are asking you to present us with pictures where all is not as it seems. Can you use your camera to create and amuse, to imitate and confuse? 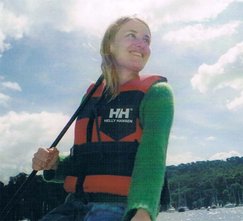 Malin Sjoberg grew up in Stockholm, Sweden and holds a BA in International Relations (Boston University) and BFA in Photography (Art Institute of Boston). Her main interests range from vernacular photography to documentary photography and contemporary uses of historic processes otherwise known as antiquarian avant-garde.

Her mother always took many photographs of her growing up, putting together all beautiful photo-albums. Always intrigued how a photo of something can trigger all these other memories, absent from the image itself, she began to take pictures and made photo-albums herself. One of the earliest ones is filled with faded colour snapshots from Hong Kong, which she took while traveling around South-East Asia with her family at the age of ten.

Growing up in Stockholm, she never really considered being a photographer, and had not thought of it as a profession.

It was only in her late teens, when she saw a book of photographs by Walker Evans that Malin realized that photography could be something more than that previously seen. She remembers being stunned by the images&#039; subtle, quiet, and penetrating reflections of everyday life in 1930&#039;s America; they resonated far deeper than anything previously seen in terms of photojournalism.

&#039;In retrospect, this must have been when I fell in love with photography, because I ended up buying the book, which at that time was way outside my budget.&#039;

I like this take on 19th century spirit photography, both in terms of subject matter, and its visual components such as soft focus, vignetting, gesture and a relatively restrained palette. The mid 19th century movement of spirit photography tried to capture images of spirits and ghosts to prove their existence. This beautiful photograph not only works visually but it also suggests a wider narrative of memory, loss, and the cycle of life. Things are not as they seem as the viewer is left to question: Is the child simply dreaming? Is the baby being visited by the mother, a spirit as portrayed in the 19th century images, or is this just a fleeting tender moment in the night as the mother tends to her newborn.
There is something strange and offbeat about this image, which makes it successful. I am immediately reminded of post-war vernacular holiday snapshots from Brighton or Coney Island. However, rather than being a sentimental image of children playing and holidaymakers, the image has a surreal and slightly sinister air about it. This is due to its black and white nature along with the crop, composition and angle. Good Work.
This is a brilliantly realised image both technically and creatively. Photoshop has been used extremely well because it is not employed to create a purely gimmick image, but to suggest a wider context. For me, the power of this image lies in its duality. On the one hand, it speaks of total freedom, yet on the other hand, it implies a sense of homelessness. It asks me to question the value of the freedom of the young traveller with no strings attached.
This image is very poetic and has a wonderful cinematic quality about it, with its reflections, texture and sense of movement. It reminds me of something my first mentor would often say, “Make images not of the world, but in addition to the world.”
This unpretentious photograph answers the theme 'Not as it seems ' perfectly. It is a simple and effective fun image.
This photograph has a fun and childlike surrealism about it. Not only is it a well executed colour image but it is also a playful take on the competition theme.
I find this photograph beautiful, poetic and subtly ominous. I am left wondering is this is the scene of a crime? Something appears to have taken place here, which is suggested by the light, restrictive colour palette, composition and use of negative space, which brings to mind Scandinavian Noir!