Identity is an extremely important concept for human beings as it dictates how we see ourselves both as a person and in relation to other people, ideas and nature. It allows us to express our individuality and our group affiliations and gives us a sense of who we are. Knowing who we are has a great influence on how we behave and how others will react to us. Throughout history, we have used many different ways of expressing our identity from hairstyles, clothing, make-up and gestures through to marks on our bodies including paint, tattoos, scars and piercings. Other aspects of identity such as language, race, ethnicity, religion and occupation are also powerful markers of cultural identity.

The theme of this competition seeks to inspire you to explore the concept of identity as a means to establish a sense of belonging. It asks you to examine how we, as individuals, show or illustrate who we are to the world and on the contrary how we may attempt to conceal our identity from those around us. What are the personal idiosyncrasies that separate one person from the next and make us unique? 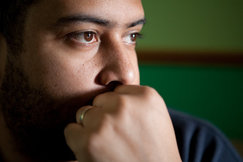 Growing up in the beautiful county of Hampshire, Richard first became interested in photography at the age of 11 when he was given his first camera – a little Kodak 110 pocket camera – which accompanied him everywhere.

Richard&#039;s interest and passion for photography grew as he progressed from 110 pocket cameras to 35mm compact cameras and then bought his first SLR at about the age of 14. His passion was further encouraged whilst at college, where he had access to dark rooms, enabling him to experiment with developing and printing his work.

Photography went hand in hand with an appreciation of art and, more importantly for Richard, architecture. For several years, whilst at University, architectural photography featured heavily in his portfolio – both in its own right and as the basis for illustrations and architectural renderings.

After University, family life beckoned, and photography took a back seat, relegated to family holidays and special occasions.

It wasn’t until Richard started dabbling with digital photography as a minor part of his job that his love affair with cameras and photography was finally rekindled. His first DSLR saw his photography rocket from around 4 rolls of film a year to over 4000 photographs during his first year with his DSLR and almost 70,000 photographs last year.

His infectious love of photography led to a number of private commissions followed by his first commercial commissions (with international retailer Marks & Spencer).

Since then he has continued to seek commercial and private commissions and is lucky enough to be able to count Marks & Spencer Plc & The Great Ormond Street Hospital Children&#039;s Charity among his corporate clients. In addition to taking on commissions, he is an active member of local camera club, having been a committee member for the past 4 or 5 years. As a result of this, he has been heavily involved in competitions within the club – both organising and judging.

Richard is never happier than when he has a camera in his hands and sees photography as a constant learning experience. He particularly enjoys food photography and architectural photography, but is open to new photographic experiences.

Poignant and thought provoking. An inspired and well executed interpretation of the brief.
A cleverly thought out and executed image that meets the brief in a creative and original way.
An interesting and slightly disturbing composition - the resemblance between the dolls and the subject raises the question of whether these represent the way that she sees herself
A stylish and well composed image with excellent use of colour
Great image - excellent composition and use of shallow depth of field.
Interesting lighting and a model whose face is full of character add up to an intriguing
A stark self-portrait exposing the hard earned scars from numerous inner battles.